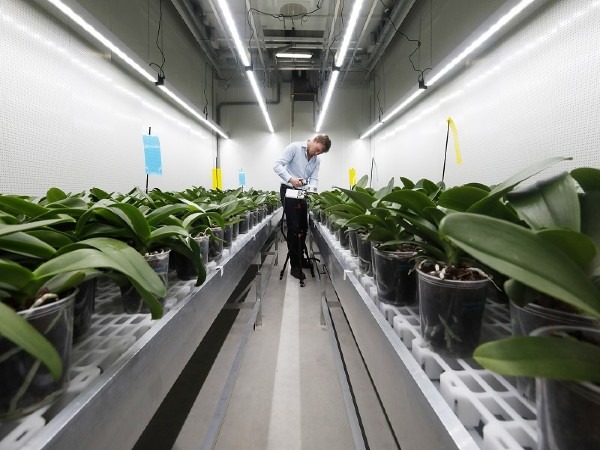 For a few years they were good neighbours, who found enough common ground to jointly develop an affordable photosynthesis sensor. At one point, Sendot and Plant Lighting both moved to larger business premises. A strong cooperation remained. “Sendot is specialised in plant sensors, we have a lot of knowledge about plants,” says director Sander Hogewoning. "By working closely together, we both achieve more."

Hogewoning looks back with pleasure on the development process of Sendot's photosynthesis efficiency sensor. A multidisciplinary team with specialists from both companies worked on it for many months.

“We have had advanced photosynthesis measuring equipment for some time, but such a device is far too complex and too expensive for flexible use in horticultural practice,” explains the scientist. “Sendot wanted to develop a handy, affordable version that growers can use themselves. The development should start from their existing technology to measure chlorophyll fluorescence. A handy photosynthesis sensor would also be useful for us, because there is a great demand for a flexible research tool on location.” A development project was born

Prototypes of the new measuring instrument were tested in the Plant Lighting research facility. “The technology turned out to work fine in our climate cells,” says Hogewoning. “We critically tested and benchmarked this with high-level equipment. Multiple orchid growers are already working with it and that is good to hear. ”

Plant Lighting and Sendot will use various photosynthesis efficiency sensors in a trial research projects for instance with aubergines. “To gain insights into unexplained stress reactions, we have to zoom in on photosynthesis,” explains the plant scientist.

He also plans to make use of other Sendot sensors, such as the oxygen sensor that can be inserted into substrates. “We have not worked with oxygen sensors before, but it is a useful control instrument for keeping research and growth parameters constant. Growers however will mainly use such an instrument to optimize watering. ”

Hogewoning observes that sensors are increasingly being used more widely and more intensively in high-tech greenhouse horticulture. “Predictable and reliable production is becoming increasingly important, especially in food horticulture. In floriculture, more attention is also being paid to the added value of sensors. Sendot is a very interesting party in that regard. Not only because of technological innovation, but also because this company makes them accessible to many. ”

The researcher says he also finds Sendot's Senbox data platform a great innovation, which he is making good use of in his new research facility. “You can connect multiple sensors to it and we use quite a few. With 48 research compartments in several climate cells, there is heavy data traffic. We have in total nine Senboxes in use. In this way we are able to manage our data. ”

The adventure of Sendot and microLAN is a real ABC's

Stay informed about our latest updates.